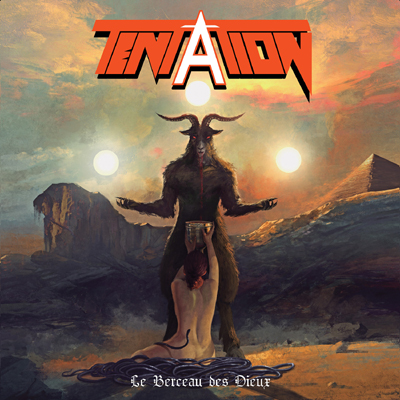 There was quite a hype generated lately, about this forthcoming debut full length by TENTATION from Torreilles, Occitanie, France. In fact the band is not a new story and that particular debut album was always their big goal for them, in fact, they have been working on it for the past ten years-.

The band was formed in 2012 in Torreilles, a small village in the south of France. Visitors are immediately reminded of Torreilles’s history when passing through its streets – many of the buildings in its center have maintained a medieval appearance. It has become the ideal setting for TENTATION to create their own brand of classic heavy metal.

From the very first announcement of the “Le Berceau Des Dieux” debut full length and the release of the first two singles, I set my radars ready. Been in touch with the earlier works of the band I was curious enough to check out the complete material of this debut.

Musically the band brings to front, a perfectly balanced brand of classic Heavy Metal,  combining many interesting elements from the golden mid 80s of the UK Classic Heavy Metal scene –IRON MAIDEN in particular- while letting this vintage dark touch of early MERCYFUL FATE to fill their soundscape. Of course 80s bands from their own country like ADX, BLASPHEME and of course SORTILEGE can be mentioned as huge influences mainly due to the fact that they chose to sing in French language.

However I should point that all above described musical elements would mean nothing if the band was not offering that solid and inspired songwriting, they actually offer: Darkly shinning riffing, into the point vocal melodies and memorable lead themes are shaping songs that you want to listen again and again: “L’Exode” -what an amazing opening riff this song got-, “Le Taureau D’Airain” -I also loved the acoustic interlude prior to this one-, “Baldr” -perhaps the darkest song of the album-, and of course “Blanche”. “Heavy Metal” is one of the album’s anthems as well featuring guest vocals by: Patrice Le Calvez (TITAN), Iron Jérémy (IRON SLAUGHT) and Jey Deflagratör (HEXECUTOR).

“What about the lyrics?” you may ask. Well translated as “The Cradle of the Gods”, “Le Berceau Des Dieux” delves deep into TENTATION’s interest in mythology and ancestral legends.

I have nothing else to write, here we deal with an amazing classic Heavy Metal record, it brings to front all those vintage elements that marked the big days of the genre. It includes inspired and well performed songs brought to you by Heavy Metal fans that are simply expressing their passion through their music, leaving aside their daily life and job obligations for a while. I would definitely spin this one, after a hard day at work with one glass of vodka, or two. Do the same.

The album will be released on Gates of Hell Records, September 29th.

At The Gates Release New Music Video for “Cosmic Pessimism”