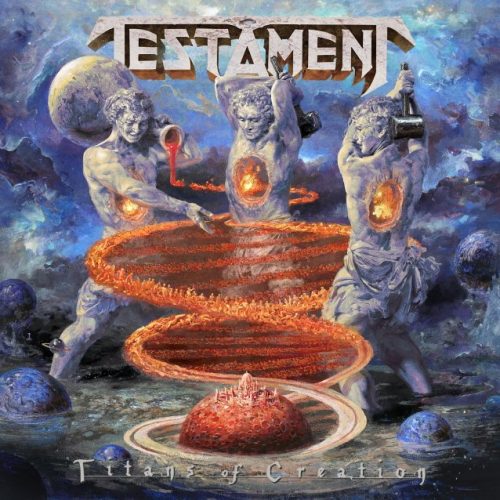 First I have to confess something: For me Testament has the best rhythm section on the planet. Second personal confession: They have some of the best musicians in all instruments; it’s an informal “Thrash Metal Dream Team”. Does this speak for itself? Yes and no. On one hand you know that what you hear is good, on the other hand it is the compositions that count. Testament since “The Formation of Damnation” and the discs that followed use a specific formula that suits them, that has created distinctive features of what we call “modern era” of Testament. “Titans of Creation” is the best and most representative work of this band’s period.

The production is a killer one. Chuck Billy remains a beast behind the microphone, that has the ability to bring you down to your knees with his melodic approach when it’s needed. An example is “Dream Deceiver”. Hoglan and DiGiorgio are above criticism and they create an inaccessible wall of sound. I leave the guitar twin for the end, because it’s just brilliant in all compositions. You will hear really interesting things here. For the first time, some oriental scales that fit the lyrical content of songs such as “Ishtars Gate” and “Code of Hammurabi” will also be heard.

As a conclusion the songs reveal many elements after several hearings, as the work is multilevel rather than superficial. The songs grow inside you every time you listen to them. Overall, you will hear all the characteristics and the features of their sound that defines their recent past: longer compositions, many melodies, speed and then some mid-tempo tracks. No one will be surprised that Testament offers us yet another fantastic album. But on the other hand you can’t hide your excitement when you hear it with your own ears.