After an eponymous debut album in their homeland Iceland this young trio unleashes their sophomore album on the world though Nuclear Blast. Voyage will definitely reach a bigger audience and truth be told, I am happy they will. Just like other distinct bands in their own genres (I am thinking of Björk, SigurRos, Skälmold) another amazing musical project comes forth from Iceland’s tiny population of 300,000+ people. Vintage Caravan managed to pump a lot of good things from classic 70s bands in one album. It is retro with a modern touch. It feels like stoner, blues and an occasional psychedelic trip. Think of great names like Deep Purple, Led Zeppelin, Black Sabbath and Cream.

“Craving” and “Let Me Be” take us through some serious classic hard rock grooves. The band makes it clear we are dealing with some great musicians here. “Do You Remember” takes the tempo down a bit with a ballad. Maybe the band felt compelled to write a slower song for the album, but I have the feeling their strongpoint lies much more in the energetic songwriting. It does show, however, that singer Agústsson can impress in many different styles. On “Expand Your Mind” they invite us to take a psychedelic trip with them. One of the strongest compositions on the album containing an amazing bass solo by Númason. Rightfully chosen to be accompanied by quite an extraordinary video. Definitely worth checking out if you want to change your view on guinea pigs and hamburgers. On “M.A.R.S.W.A.T.T.” and “Cocaine Sally” the band returns to their powerful hard rock riffs and grooves. “Winterland” manages to enchant me with some amazing instrumental parts throughout the song. “Midnight Meditation” does not offer any new additions, but I can still say it rocks like all the others. The album closes with “The King’s Voyage”, a 12-minute trip where the band shows all their different colors.

Do not expect a band simply copying many of the great names from the old days. By experimenting with their own blend of all these influences Vintage Caravan comes out strong with their own sound. A band to keep an eye out for. 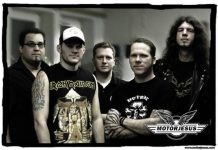