The highly impressive cover art of Dear Desolation that carries the signature of the always outstanding Ellinar Kantor – and I write it without even bothering to check it out if he’s actually designed it –builds up the atmosphere for something emphatic. Taking also into consideration the title, we probably have a complete summary of the whole project. The wolf who nurses the lamb, his future meal, portrays in an image our prescribed destiny, the inevitability of the destruction that will for sure come. The system just maintains us alive because it needs us until it’s time to become supper. The title of the album that serves as the title of a letter having as a recipient the human despair, reveals a more lyrically mature band that brings politics, social problems and everyday life to the forefront. Musically, we could call it a dark soundtrack of “human despair” where blastbeats and cuts give meaning to the term deathcore honoring both the hardcore elements and the dominant death metal atmosphere. Melodious windows and catchy moments are scattered throughout the album without reducing its force and aggression to the slightest degree. The compositions exude a certainty about the band that performs with confidence and unleashes a relentless attack on the unsuspecting listeners. Compared to its predecessor, Dear Desolation is a more violent album and quite darker. Surprisingly, I cannot find a piece that lags behind or stands out because everything is well thought out and well written. Personal favorites though are “Slaves Beyond Death”, “The Son Of Misery”,  ” Puppet Master”  and “Man Is The Enemy”. Excellent! 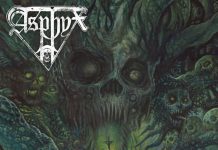