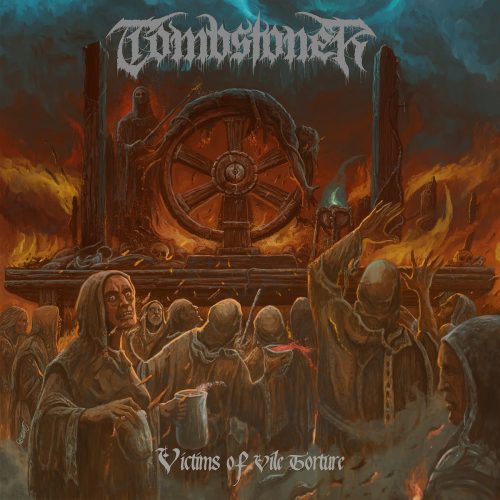 I can easily recall some bands featuring 2 brothers in their line-up (Van Halen, Pantera etc), but definitely I can’t without google or searching in my old magazines-newspapers files to find a band featuring 2 couples of brothers, as Tombstoner. The New York based death metal act line-up is: Jason Quinones on drum, Dan Megillon rhythm guitars, Thomas Megill on vocals and bas, and Jesse Quinones on vocals and lead guitars.

“Victims of Vile Torture” is their first LP following last year’s EP entitled “Descent to Madness” that was also released via Redefining Darkness Records as their debut full length. It is really obvious to see that Tombstoner’s Death/Thrash/Grind is blended with hardcore elements in the veins of Power Trip, but truth be told Tombstoner is closer to (90’s era) Napalm Death or any traditional death metal band out there. Probably their vocal lines (in fact guttural growls) will bring in mind Gatecreeper and Decapitated, while the aggressive nature of Tombstoner will be familiar more likely to whom has references to Suffocation, Cannibal Corpse, Bolt Thrower, Benediction or even Entombed in some hooks, not that the hardcore elements are absent but there are not in such abundance.

The lyrics are neat while “1,2,3,4, smash through the door, bash your skull” that we hear on “Sledgehammer” -one of the best moments in the album-, shows that they can be catchy, while simple and 100% straightforward. The use of eerie keyboards, catchy verses, furious growls, razor sharp riffs; small doses of a violin play (in “Armageddon”), thick bass lines, sinister sound, some awesome guitar solo and heavy guitars create a frantic environment that is the proper one for the 10 compositions of the album to shine. Highlights: “Frozen in Fear”, “Nothing’s Sacred”, “Breaking Point” and “Sledgehammer”.

“Victims Of Vile Torture”, that is out already since 30 July 2021 via Redefining Darkness Records, is an excellent and promising introduction into Tombstoner’s world.