“Night of the Stormrider” is the second studio (concept) album of Iced Earth and was released at November 11, 2011 in Europe (April 28th, 1992 in U.S.A.). Iced Earth would have been a reference for those who love “lost diamonds” or the unappreciated heroes of our music, even if they only were to release this album and their first one. You see, these releases have that cult and underground vibe (along with many great songs, even if they’re lacking originality)… There weren’t many people playing Heavy Metal back then, a style that this release was exalting, plus it was like it wasromanticizing our teen years and choices andthat’s pretty much all you need. Schaffer had different plans for his brainchild though, and after 1996 (and two albums later) Iced Earth were sky-rocketing commercially (kudos on them), even though they never won me over completely. Not as close as their first 2 albums did, in which I find many advantages but I’m obviously not going to glorify, without saying that they aren’t great albums, but I was never a huge a fan of them to be honest.

Theirtrademarkistheir vivid riffs, the Metallica-like Thrash elements, their Iron Maiden influences, John Greely vocals -that are far better than those of Barlow in my opinion- Schaffer’s ambition and the alternation between rhythms, which you will repeatedly find in this album that regardless of the fact that the monumental intro of “Angel’s Holocaust” when passing from “Carmina Burana” seems uneven, with lots of ideas sounding similar, I still find it to be their best album ever!

The albums concept is about a guy that is betrayed by religion and he is turning his back on it. Satanic forces are taking advantage of that and they’re using this man’s rage,a man that has been through a lot (he is ordered to travel through the desert and he has visions), and reveal to him the dark side of mankind in order to control his mind so he can destroy humanity.

He is the “Stormrider” that after the evil deeds he commits, while condemned in the depths of hell, he realizes it is too late to repent or  undo the evil he has done.

*Recorded at Morrisound Studios at 1991, producers were Tom Morris and Jon Schaffer. 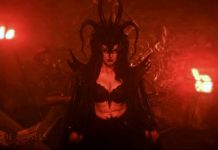