There are many bands amidst the mainstream or underground circles that have managed to touch the Greek crowd’s heart and create an unbreakable bond. One of those bands are undoubtedly Flotsam and Jetsam. Each of the times those Heavy / Speed metallers from Phoenix Arizona, visited Greece they led us into total mayhem. Flotsam and Jetsam will land on Greek territory once again (Monday 17/10 Thessaloniki, Thursday 20/10 Athens), so that’s a good opportunity to take a look at one of the genre’s most exciting records and an excellent moment for Flotsam and Jetsam as well. The record we will be dealing with is entitled “Doomsday for Deceiver”. As implied, the following article will have no objective perspective and whatever you’re going to read is a fan manifest. Beware.

“Doomsday for the Deceiver” is Flotsam and Jetsam’s debut album. It was released during July 1986 via Metal Blade Records. The recording process lasted for a couple of weeks, while its budget was just $12,000. The record’s production was handled by Brian Slagel and Bill Metoyer was its engineer. The final result was a monumental one that appealed from the first moment to the audience and still is referred to by many people as one of the most influential albums ever released in this genre. The energy and momentum that are expressed in “Doomsday for the Deceiver” are unparalleled. Where should you turn your attention to? The stunning rhythms and solo guitar parts? The incomparable technique, that’s expressed perfectly through the complexity of the compositions and the overall performance of the members? Eric’s screams that have haunted our minds?

The album opens with one of Flotsam and Jetsam’s best known pieces, “Hammerhead”, a song for which a video clip was shot (you can find a link at the end of the paragraph). It’s one of the most catchy songs of the record, and always elevates your mood, with its fast pace and the playful self-management of Eric’s voice.

A sonic bomb comes next: “Iron Tears”; the piece in which monsieur Eric has gone ‘all in’ and shook the pot with his excellent vocal maneuvers, demonstrating that the extent of his voice is huge and easily flexible. “Desecrator” follows up next with its high-speed and intelligent riffs that slither in your head slowly and hide forever in the shadows. A sonic uproar, that’s followed by “Fade To Black”, which comes to repurpose the record’s rhythms. More rock ‘n’ roll mood, more adventurous guitars, more playful playing in general. The thrash parts are a bit reduced and melody now holds the central and inalienable primal role in the synthesis. There’s a new change in pace with “Doomsday for the Deceiver” entering slowly and melodically, building a smooth climax in the composition of this almost ten-minute piece. Characteristic is Eric’s scream in the word “Doomsday”. “Metal Shock” comes afterwards, moving on the same paths, with dramatic elements in its slow and melodic intro. Of course, while the song progresses, the main riff rockets the song to the clouds, while the sequence among the instruments is great, despite the low initial production of the record. The band shows character and independent existence among the other bands of the genre. “She Took An Axe” and the expression “everybody can go to hell” acquires the true meaning of it, judging by the history hidden in the lyrics and the track’s structure. Nice detail for us the sick fans of F&J is the fact that the lyrics of “She Took An Axe” refer to the story of Lizzy Borden, who was accused of murdering her parents in 1892. In fact, the refrain (“Lizzy Borden took an axe, gave her mother forty whacks. When she saw what she had done, she gave her father forty-one.”) is structured to resemble the quatrains that children sing when they jump the rope. The track “U.L.S.W.” that follows is probably the most overlooked song of “Doomsday for the Deceiver”, and I do not understand why it happens, since there’s nothing bad with it. “Der Fuhrer”, which closes the album (the first version of it anyway), refers to Adolf Hitler, presenting him as a demon, a source of evil. Naturally, in no way the lyrics are lyrics sympathy or admiration for the main character or the ideology he raised. Apart from the lyrics, “Der Fuhrer” is one of the most magical moments of “Doomsday for the Deceiver”, since the compositions and the orchestration are of unique quality: from the haunting intro, over the main part of the track with Eric’s amazing cry and from there it takes off with the fantastic solo and accompaniment of drums. The album closes [again] (considering the subsequent versions of the record) with a sick instrumental song called “Flotzilla”, a title that essentially “baptized” the monster of the cover and therefore gave the band as short nickname. Certainly, it’s one of the top instrumentals of the kind, although it wasn’t included in the original copies of the album (see more details below).

“Doomsday for the Deceiver” was re-released in 2006 for the 20th anniversary, including a re-mastered version of the album, a DVD, demo tracks, and the original version of “Doomsday …”. The Disc 1 contains the album tracks plus bonus tracks from the demo “Iron Tears” of 1985 (Iron Tears & I Live You Die). The Disc 2 included the remixed material with bonus material from the demo “Metal Shock” of 1985 (Hammerhead, The Evil Sheik, I Live You Die, The Beast Within). The Disc 3 containing a live recording from a Bootleg of 1985. Moreover, notes were added by the band and the band’s then-bassist Jason Newsted, along with the first interviews of Flotsam and Jetsam (between 1983-1984)!

Fun fact: The cover of the album can be seen in the film ‘Sleepaway Camp II: Unhappy Campers’ of 1988.

Putting everything in a nutshell because as always I got carried away, “Doomsday for the Deceiver” is one of the most intelligently played records of all time in the extreme genre and a record that can grab you by the neck and throw you violently down a cliff. It’s unnecessary to repeat how important or influential this record is. Those who know, can feel me. Those who don’t, check it as soon as possible, because Flotzilla is coming to town again soon!

More info about the gigs of Flotsam and Jetsam can be found in the links provided below, for Thessaloniki and Athens respectively.

Listen to the entire record here: 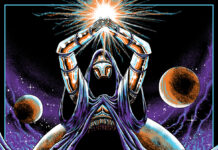