Four years after the release of that totally chaotic EP entitled “Ravenous Damnation’s Dawn” in 2013, the Swedish bastards Ensnared came back with their highly anticipated first full-length album entitled “Dysangelium”, which was released via Invictus Productions in cooperation with Dark Descent Records on May 2017. The sonic result we indulge ourselves with is basically the logical development of the band both music-wise and in terms of compositional maturity. Monolithic, dense, frantic Death Metal, with well-written, intelligent I would say compositions that play with your mind. Strong dynamics, stifling sound, sick and haunting tremolos (which with a very abstract thought we could say that they were influenced by early Morbid Angel), inconceivable drumming skills –dude is a war-machine, no kidding. The atmosphere that is built seems to be taken out from a horror book of tortures from the Middle Ages. If you unconditionally give yourselves to Ensnared and their music, you will most certainly feel lost in a vast maze with no beginning and no end, with little chance of returning to the outside world. Perfect were those touches of shamanic – driven breaks that lighten the album, just to keep us away from the taste of monotony. Probably one of last year’s best releases. Hit it, if you haven’t already. 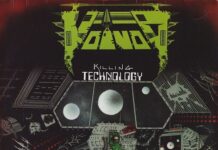