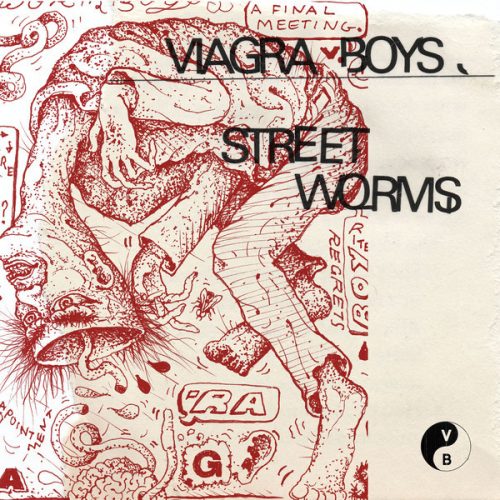 There are several reasons that make you buy a record from a band that you aren’t a fan of it. You may be fond by its artwork or even just its title. A song on the radio that’s stuck into your mind and you keep singing it in the entire 8 hour shift or a friend of you could make a nice suggestion as well you could be impressed by the band’s live performance. Viagra Boys won me from the video they made for their song “Sports”. Not on Youtube. Neither on MTV. They just send it in our e-mail for the News section of Metal Invader. I liked their aesthetic, their way of not taking things more serious than they should be taken and the humorous lyrics meets ironic attitude. A half-naked mustache guy full of tattoos is in the middle of a tennis court. While a match occurs in the court between two players the guy is wearing his black sun glasses and his 3 stripes Αdidas sweat pants holding a microphone -and it’s cable twisted in his elbow- singing like Iggy Pop/Nick Cave on a less is more prose meets post punk crescendo.

Following two EPs of promising weirdo garage-punk, Viagra Boys’ ‘Street Worms’ may offered less surprises than expected, but still was something that shook the scene. Even though the band hails from Sweden’s capital their singer Sebastian Murphy is as American as the worker’s butt-chicks on the front cover in Springsteen’s “Born In the USA”. This factor gives them a less exotic, still great result. Because Murphy is using his native language with extra confidence to spit the lyrics (at least more often than he sings them). Whoever loves a theatrical approaching in his dark quirky, rhythmic, manic, sarcastic, raw, energetic, humorous post punk/garage rock (that is full of mid tempo songs, drum beats, saxophones, thick bass lines, mocking verses, jazz, disco or tribal elements and whatever comes in your dirty mind) with lyrics dealing with social issues (please count cheating husbands apologies in) here he/she can find an excellent paradigm of surrealistic parody of the western society that is built up on foolish clichés and sweating machismo in the veins of The Stooges and The Birthday Party and Hardcore Devo.