Coming from Trikala, Greece, WARCODE were founded back in 2007 and after one year their self titled demo was out. Unfortunately college studies, military service and other obligations the band members had, postponed the release of their first full length album which was recorded back in 2011 (such phenomena are something that many Greek bands have in common). But let’s focus on the essence of this release. WARCODE play elaborate thrash/ death metal (without the band crossing over to progressive metal), something their technical skills allows them to do. Their playing is tight and their music has a lot of variety. Blastbeat outbursts are being followed by slow groovy parts with hardcore references and all those elements are brought together harmonically, giving the album a nice flow and not letting the listener grow tired of it. The excellent work done with the lead guitars, clearly influenced by Chuck Schuldiner, is another thing that’s also worth mentioning. The sounds of DEATH, SEPULTURA, SLAYER and PANTERA are assimilated and ran through the band’s personal filter, so they are the basic influence for the band but not the resource of a barren imitation. In total this is a decent album concerning the bands performing and the music itself, with a very good production that is strong and clear but not polished and plastic (thankfully). Definitely not the most original release out there (as nothing else is in the spectrum of the extreme sound these days), but at least it’s an honest expression and not some replica of the classic bands that the retro-movement is full of (there are exceptions of course). And that’s that. 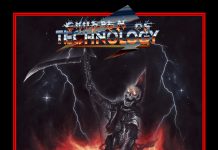