Here come the fourth albums released by various bands, which we often come to compare to each other measuring up the bar height, looking for weak links, making analyses of any kind as well as holding abstract theories. Here comes also Wardrum’s fourth album. As for it, first you have to find an efficient way to push the stop button, to pry yourself away from it, so that you can find some peace and just admit that this band is almighty for real. Yes, almighty and I’m writing it in its literal meaning in all conscience. You can see, dear reader, that the big bands are considered as such when they are able to compose songs standing the test of time, impressing upon eras and periods. It’s the band’s fourth album which is full of such songs.

Wardum’s Metal looks straight into your eyes. It’s straight as an arrow, clear, well-built and full of inspiration. Its creators use a technique to reach a direct result that sticks to your mind. And that happens with each and every song. A technique that serves music and not a kind of music that serves a technique as a means to an end. Besides, we have to do with a pure Metal album. So, the challenge for it is to become known. When was it the last time you listened to a whole loud album? Just tell me.

The Power Metal practices of the album point towards America. Those of you who have spend some more time listening to the band’s so-far material, you would have realized that from a stylistic point of view Wardrum can rely on some standard technical US Metal forms, but they totally sound Wardrum-like concerning both the composition model of each track and the final result.

They won’t just make do with splicing some riffs. They will hide small lead guitar melodies in each and every point of the tracks; they will set the almost melodious drum phrases free to creep in specific rhythmic meters giving you chills. They will let their redemptive refrains to catch you off guard. And in the end, you won’t be sure about if you want to hum the solo or the vocal melodies, when and if you manage to push that stop button I mentioned before.

The album steps on the gas. On the whole, it’s the most torrential work of the band. It consists of mid-tempo full melodic moments, their hidden ace in the hole. You can’t classify the material easily, but since there are fluctuations and shifts in all songs, there is a plethora of themes; generally speaking, listeners are always alert to what they will listen not only in the next track but also in the next minute of the truck. And this lasts after many listens, as something new always comes to the surface. There’s a wide variety. There’s an enigmatic riffing that characterizes them from the very first day of their formation —a “Helstar meets Lethal” situation, done in the Wardrum way, though. That’s right, the two composers, Kourou and Vrettos, have lavished us on plenty of steel full of a pessimistic optimism. Guess that the drummer writes both a big part of the material and all the lyrics making this band his intellectual property. Vrettos has already recorded some of his most amazing solos, while Papadopoulos sounds more mature than ever. Basically, we have to do with a world-class voice. Suck it up. He is also aware of it and in this particular album he manages his voice even more consciously. We should also mention that a second guitarist has been included in the studio, too. An honorable man, Mr J. Demian —whom you will meet to have been a long way having been a member of many considerable bands in Thessaloniki, Greece— bares his teeth at the album, so that Kourou and Skandalis are able to work on their rhythmic parts more easily.

It’s really difficult for me to choose one among the best tracks. Which can I refer to? To “The Unrepentant”, which grabs you by collar from the very beginning of the album? To the “Let the Flames Grow” with its almighty refrain? To the groovy “Virtues of Humanity”, the overwhelming “Baptised in Fire”, the dynamite-like “Shades of Hope”, which has a progressive perspective, or to the epic title song “The Awakening”?

We are definitely talking about the best album of their career so far and I expect that the meritocratic (laughs) god of Metal will give them the ticket to somewhere better with this album. They do have talent and they have worked hard. As listeners, we benefit from such an amazing album. You will listen to it and you will understand. Having mentioned the listen, prepare your loudspeakers because Chris Donaldson (Cryptosy) has done a terrific job in the album production, which was made in The Grid Studios in Canada. I mustn’t forget to mention the usual suspect, Piotr Szafraniec, who has edited the album cover and the layout, as well. Of course, Monk is a real presence in the cover of the fourth album, too.

I have nothing more to say. We’ve got 12 tracks technically well-played but direct US steel. Albums of that kind keep us stuck to Metal even though they’re released once in a blue moon. To conclude with, I just have to mention that “Sometimes” is one of the best Metal tracks I’ve listened to the last 15 years. Just because. 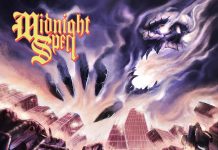 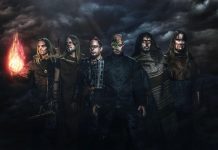