In Greek language, homeland is the land of the fathers, while in English it means the land we live in or the one we come from. The last one is very complicated, mixed and lost in the ages. In completely opposite direction from the trend that is globally prevalent to trace our roots, most of the times wrongfully and in vain trying to realize some sort of legacy against globalization that is product of the imaginary somewhere in our unconscious. The need to belong somewhere is expressed through reactionary and thoughtless acts: feeding our ego either through achievements made by others, or through devaluing others that we never met. But we all know where this leads. In this bigot witch hunt there is a kind of healthy distancing from the menace of globalization. The one which accepts diversity and invests in the manifold of civilizations as parts of a mosaic that constitute the broader picture, the panhuman civilization. Along these lines, the uniqueness of American Wayfarer to implement elements from their land of origin in their American black metal finds me seduced. Those of you who have dwelled in Panopticon’s Kentucky will find a perfect specimen of Cascadian Black Metal that bred a generation of restless youngsters in this and the previous decade. You can find similarities with Ash Borer and Agalloch as well, with extra elements, a mix of blast beats and tribal percussion, atmospheric parts and post-rock attitude. Some of you might find it minimalistic since there is a certain economy of information for the listener who agrees with less is more. Still, it becomes a vehicle of neo-folk with acoustic guitars and ambient orientation blended with clean vocals and train-like and frozen riffs (namely pure black metal sounds) with deep lyrics, like in “Nations of Immigrants”. It was released in the summer, but it is never too late to invest in that record as one of the best of the genre for this year. The distribution through Profound Lore might bring them to wider audiences and to a better appeal of their vision. The imposing cover, the overall aesthetics and the artwork can also be added in the positive aspects of this album. 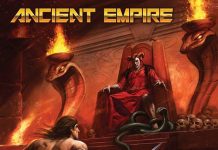