Witch Mountain (Portland. U.S.A.) are Universe 217 alter ego, the lost brothers and sisters from the Athenian Doom masters and below you can listen yourselves why I claim such a thing. Witch Mountain’s self titled album has so many similar elements with the greek band as also with iconic Doom gods such as Trouble and Saint Vitus, while the Iommi-like riffing is so obvious too. After all, you don’t expect any music direction change after 20+ years of life from a band… This is their first album after Uta Plotkin’s departure and all eyes are on the new singer. Kayla Dixon is a really gifted vocalist with a characteristic soulful performance with a variety of growls, screams and emotional howls on her repertoire. The atmosphere is almost bluesy and claustrophobic and the 5 compositions are top notch with strong bass lines that create a thick sound (by another new addition to the line up- Justin Brown) creating a weighty and melancholic result. Certainly a must for fans of all the above mentioned groups but also for Electric Wizard, Cathedral and Castle fans too. 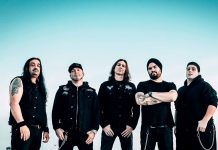