On March 8th, WOLF from Sweden will visit Greece for the first time for a concert. The news has not made much of an impact, as only a handful truly understands what “WOLF” means. This March is also filled with concerts by more resonant and block – busting stage names; Carcass, Sanctuary, Epica, Primordial, Haunted and many more. Why should anyone go and see WOLF?

I’ll try my best to explain why.

1. Wolf, in my humble, honest opinion, is the best heavy/power metal band in the last 15 years. For me, this is non negotiable and final. They have the discography with the rare streak, they have the EPIC SONGS, they have the character, they pretty much have the full package, including the Mercyful Fate / King Diamond influences. I don’t know what other band you think deserves the same distinction. Slough Feg? Fine, even if I have a different view. The point is that these bands are not numerous; 2-3 of them claim the title with any serious merit (having the matching discography). One of those (THAT ONE!) is visiting for the first time, with a great record in the bag. It’s a historic gig, in every respect.

2. Wolf have a remarkable reputation for their live performance quality that they blow away the minds of people who had no prior experience of them. If you take a look at spectators’ comments from Bloostock (UK) or ProgPower (USA), you’ll see for yourselves.

3. It’s a concert that will make you want to hit your head against the wall if you miss it. I’m certain of that as I am certain that at some point their value will be universally acknowledged.

4. Ιron Maiden, Mercyful Fate, Judas Priest. Wolf is a band that ideally merges these three cornerstones of heavy metal into perfect tracks. I believe that anyone who is a fan of those titans will easily become a fan of Wolf; i.e. potentially EVERY SINGLE METALHEAD. The reason we still do not worship them here [i.e. Greece], remains a mystery (not that difficult…) but it is never too late. Basically, it’s high time we knew about them. I’m not trying to show – off or pretend to be a professor of metal. Up until recently, I was myself a part of those that lived in deep ignorance of this great band.

We’ll go back a few years, particularly 2009, when my eyes were finally opened and the blind man SAW.

It had been a long time since I last saw Manolis. We had lost touch for a while and the spring bringing forth metal was also lost, since Manolis has always been a major source of metal, both old and new releases and – of course – a great conversation partner on metal issues. The heavy metal guru, the one who digs the deepest, the most knowledgable metalhead I personally know, and most crucially a fully – trusted listener. If Manolis says that something is good, IT IS GOOD. Guaranteed. Proven again and again (and again) since 1993.

“Come on, Manolis, put on that great band, the one that all these years has eluded me”, I said, asking for something new. I hadn’t been in his house for years (20% furniture, 5% empty space, 75% vinyl records – all over the place), so it was certain he could find something good.

“Have you ever listened to Wolf?”, he asked me right away. “No”, I answered. Have I heard that name from somewhere else? Who knows? Maybe, maybe not. I definitely did not know what to expect.

“Good. Get ready to listen to the best heavy/power metal record of the decade.” “That’s a bold statement.” “Man, do you know me to bullshit around?”

He handed me the vinyl record. “The Black Flame”. The decade’s best heavy metal album had only come out in 500 copies? Hey! King Diamond tee on the back cover photo. Before it was cool to say how cool they are. Point. Then suddenly, “Children of the Black Flame”.

Woah. WOAH. Instant shock. “This is fucking awesome!” “What did I tell you?”

That was it. He showed me the way and I followed with happy steps and black rabies. Shortly after that (thank you Internet, thank you torrents – except for that asshole who didn’t include the MF cover in the Black Wings torrent, congrats dickhead) I was completely enthralled by them. Iron Maiden, King Diamond, Judas Priest, amazing solos everywhere, intro solos, double solos, heavy metal DAMMIT, vocals with an attitude – everything just perfect. And even if some familiar melodies and riffs are scattered here and there, sowhat, it works so well. Most important? BRILLIANT TRACKS, TOTAL HYMNS, I really couldn’t believe the amount of tracks I became obsessed with. Not 2 or 3 good tracks, which today is considered good enough for a quality disc. I’m talking about Maiden, KD, Running Wild quantities, great songs all over the place. And I DON’T say that lightly.

Anyway, my course of action was spinning “Black Flame” endlessly, then “Ravenous” and “Evil Star” (no correct order or anything), then throwing in the first two; impossible to get bored, obsession. After the psychotic obsession with “Evil Star” (“same level with the Black Flame! Such perfection!”), “Ravenous” again, then the first two again, shuffling the deck, in the car the family has been forcedly educated on Wolf’s discography.

In January 2011, Costas Chronopoulos asked me to write an article for Metal Hammer for a new column, in which each month a reader of the forum of the magazine writes his thing. I wrote some charming crap and closed with the following words: “If you want the best album [of the last decade] which was in its own world and H.M.Y.C. (it’s not difficult, Y means” you”. Ah!*), then I suggest Wolf – “The Black Flame”. Brilliant compositions, great voice, no restraint in solos, “The Bite” and “Children of the Black Flame”, WORTHY! “

I soon discovered that there were others who agreed that it is the best heavy metal band of the decade and Ketigenis actually mentioned it in Metal Hammer, in his review of “Legions of Bastards” released that same year. The first album that I was expecting turned out to be a disappointment in the sense that it did not destroy my mind like the streak of the previous three, but again there are some incredible compositions that only Wolf can produce. Three by my count, rather poor for the band, still an elusive dream for some of the dime-a-dozen “traditional” bands who have filled the place. It’s OK, they’re entitled to a medium –to- good record, since it has its epics.

And then life went on quietly with me posting Wolf all the time on facebook. Every now and then I get into the Wolf-frenzy and post a dozen tracks via YouTube, the usual favorites (from a 20 track pool) – for two reasons. First, when I listen to something and I’m excited, I usually post it online. Well, Wolf is a constant excitement, so Wolf everywhere. The second reason, everybody MUST know about them; Why doesn’t anyone speak about them?? Why do we only talk about the cover art of the debut? Why do all the hordes of Maiden fans not worship them when they are BY FAR the best band who follows their steps without aping their every move (borrowing a couple riffs doesn’t count, ask Kai Hansen!) All those who gush over the god King Diamond and Mercyful Fate and glorify second-rate stuff like Attic, In Solitude, Portrait (I like them too, in the reverse order), why don’t they lose it with “Curse You Salem” or “Out of Still Midnight” – EPICS? When will the gods come for a gig? Just imagine, Iron Maiden – Maiden England tour with King Diamond and Wolf. MAYHEM. Such fantasies. I will never get to see Wolf, since we sleep on our feet.

5. it’s not possible to see Bloodstock and ProgPower drunk with excitement and on the other side of the planet, we, the HEAVY METAL HOTSPOT have only 150 people turn up. And on the next day on one hand praising the band and on the other whine about the posers that did not show up and all that well – known misery.

So I’ll do everything I can to convince anyone that this is a gig that shouldn’t be missed. Primarily, I want to do everything I can to spread the music of Wolf to the world and make people want to look into them. Among other things, this concert has not the backs of a promotion group, so it is left to its fans discretion to honor it. In the past, the promotion of such event was on the hands of each fan club. They formed voluntarily street teams, printed flyers and filled the place. Out of their own enthusiasm. This and the posts that will follow is my equivalent of a Wolf Team. And I strongly urge anyone who sees the band positively to help me and to disseminate these texts, posting them on facebook, sharing them with friends etc. And for the “well-wishers”: no one put me up to this, nobody has ever paid me (ahahaha), no collusion with the promoters or members of the band, I have absolutely nothing to gain from this, except the great joy that has always motivated to write about METAL: spread the music, let the metal flow. Wolf, along with Vektor, are my favorite bands of the recent years. I’ve written a lot about Vektor. It was about time I did the same for Wolf.

The schedule until the concert is: Review of each Wolf album. An article with a look at the band through the statements of its members and perhaps more.

PS: Special thanks to Kostas from “Steel for an Age zine” for giving me very important material, the exchange of views and even more because he is a true fan that also FEELS! 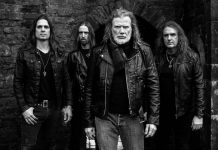